Pinnacle Fitness exists to impact, empower and change the lives of those who are intimidated by the typical gym environment through strong coaching, accountability, a family like community, and a desire to just take the first step, and then the next step each and every day.

That vision will never change.

Building you from the ground up,

I wanted to create a “House” for people to come and feel better, move better and move more.  The community that we have built has evolved to working professionals, moms, dads, grandparents and we have become Pinnacle Fitness.

We have some amazing success stories, many of which you can see on our website.

Our team has expanded.  We have continued to dial in our business model to provide the best experience possible for our clients.

In 2019, we decided as a staff to share our three pillars.  The three unique things that we do best.

We believe everyone needs help.  Having a coach or trainer can help with this.

This may be how to exercise, correcting technique, encouragement, someone to confide in or someone to share your dreams with.

You’ll learn how to workout the right way with a coach at your side EVERY SINGLE workout!

We believe everyone needs to be held accountable, including us.

We strive to make you better each and every day. You will do things that you never thought you could do and we will be right beside you every step of the way, encouraging and keeping you on track

People ask us what our secret is?  Why do people come and stay for life?  I think this is it.

Most people hate the gym. We will make fitness fun… Not the boring stuff you have tried before.

We are so much more than a gym.

We sweat together, but we also hang out together, socialize together, go to cooking classes together, participate in community events together, and lean on each other when we need it most.

If you are just looking for a place to workout, we are not for you.

But if you want a place where you can meet new people.  Move better and feel better. Get out of pain and turn the clock back on your life.  Become inspired to become a better version of yourself and be a part of a strong community, then we just might be a great fit for you. 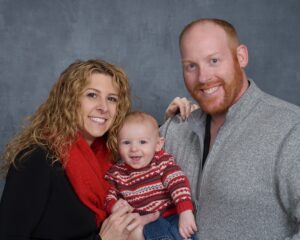 In 2010, I opened Pinnacle Fitness with a knowledge base of a trainer but not how to operate a gym.

In the beginning, I messed up a lot.

It took me a number of years to realize that I wanted more for myself.  Not in a way that I wanted to make a bunch more money. But I wanted to be a part of something that I could be proud of.  Something that at the end of the day, I could go home and tell my wife some of the amazing things that happened and know that I changed someone’s life for the better.

As the gym grew, I learned a lot.

I changed a lot.

The things that I thought were important originally fell to the wayside and a new set of values and beliefs formed.

I had a lot of injuries as a collegiate and professional discus, shot put, and hammer thrower during my twenties and thirties.  Now I was paying the price with achy joints, multiple disc injuries, and all the size and strength that I had put on when I was competing had started to turn to mush.

How could this be happening?  I was always so fit and strong.

The answer, Life gets in the way.  I started to realize that all of the members coming into see me had similar aches and pains and were constantly complaining of back, knee and overall joint soreness.

Movement makes people feel better.  I need to help people move better. And once they can move better…  I am going to make them move more!

I understood what pain was like.  I understood the feeling and the emotion behind it.  I could relate to virtually everyone walking in the door and I realized this is what I was destined to do.

“ I help people turn the clock back on their life”.

I wanted to create a gym where people could come from all walks of life.  People have always said that gyms are scary, intimidating and not a fun place to be….

I set out to change that mindset.

I started with a quality staff.  In 2017, I hired a young (young to me) and bright trainer that had the desire to learn.  He understood people and quickly learned the style of coaching that I instilled at Pinnacle Fitness.

Anthony Brown was my first employee and is now overseeing all of our operations at Pinnacle Fitness.

As we have continued to grow we certainly have had our ups and downs, defining what model is best for us, who we are right for, and we learned a lot.

Throughout all of this, there has always been an underlying motivation that is two-fold.

MY JOURNEY TO A HEALTHY BACK 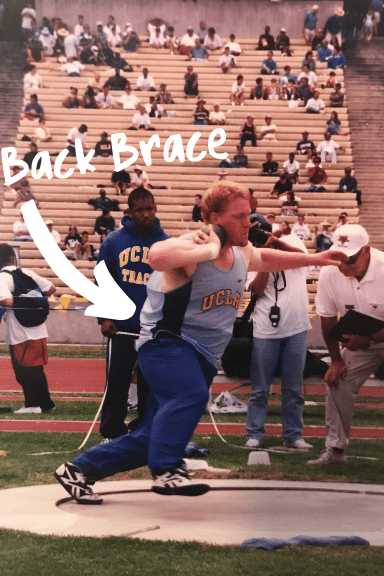 In 1994, I received a scholarship to UCLA as the #1 discus thrower in the country.  I was a shy, thick hipped, humble kid from a one stop-lite town in rural Wisconsin. I had unbelievable parents that instilled a work ethic in me that was second to none.

In the Fall of 1994, I made the trek to Los Angeles and started a heavy lifting, running and throwing regime.  I had never really lifted weights but knew I needed to gain a lot of weight to compete at the collegiate level.  As I got stronger, I put on weight and got less flexible. I started to adjust my lifting technique to account for the added weight in my shoulders, butt and thighs.  I gained a jean size each year for 4 straight years.

At the end of my Freshman year, I started to have some back pain.  Nothing terrible but definitely nagging. I was getting ready for the age 19 and under USA National meet and started to take anti-inflammatories to get through practice, sleep at night and just to sit in class for an hour.  I eventually couldn’t even sit in a chair for more than 30 seconds at a time without shifting around.

I went on to win the USA Nationals but was immediately put in a hard shell back brace after I competed at the Pan-American Games later that summer with a stress fracture in my low back.

1995 – I suffered a cracked end plate of my Vertebrae.

1996-7 – those fractures would shift causing spasms up and down my spine.

1999 – before NCAA Nationals I blew my back out and had to compete using a weight belt and no range of motion.  I was one of the favorites and finished 5th place in the discus.  A heartbreaking experience.

Fast forward to 2013, I experienced a 16 mm bulging disc which left me debilitated.  I couldn’t sit for nearly 2 months, hardly slept, and feared I would lose my business and consequently my home since I was in so much pain I could barely get out of bed.

I understand first hand what it is like to wake up every morning and not be able to move until you get in that hot shower.

How you feel young in your mind but your body doesn’t seem to want to cooperate.

I learned that the pain was difficult but it was more about the emotional and mental side.  Rehabbing continuously is exhausting and harder after each injury.

The passion that now burns within me is to help others get through their obstacles and pain.

Others may not have had as severe an injury as me but I can still help them get back to feeling 10 years younger.

9 Strategies to crush your cravings!

No time like the present to get started on a healthier you!